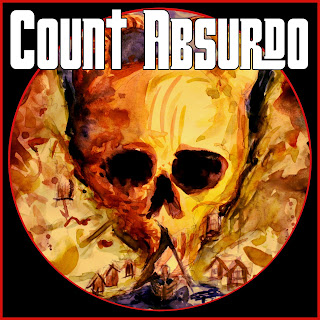 The trio of Count Absurdo released their first EP a little over half a year ago, and now they've resurfaced with another four tracks for the sequel, ready to further their reign of traditional doom with a modern spin.  "The Wolf of St. Absurdo" starts things off with lycanthropic terror, pounding drums and shredding guitar joining the bass licks and untethered vocals to get it moving quick right from the start, with "Thunderbringer" picking up where the first leaves off by channeling that energy into slower intensity as the Thunderbringer's arrival is celebrated.  "Dr. Absurdstein" gets a stomp-along beat and chorus refrains going, pulling off something not too far from 'party doom' without sacrificing respectability while gearing up for the finale.  "The Ghost of Black Night" shows up with that finish by sliding back to its '80s metal roots with more clarity, letting a powerful main riff pull things to the conclusion as the title is intoned and wailed.
It makes for a nice batch of follow-up songs, revisiting and refining the band's established style while reaching out to some new interpretations.  There's also a clearer demonstration of the band's way with putting together crowd-friendly choruses, as most of the songs here have a section that practically calls out for fans to chant along.  It will be interesting to see which aspects of their two (or possibly more) EPs Count Absurdo decide to hold onto when the time comes for their first LP, but judging from how they've developed in this short a span of time, that prospective LP will be a doozy.
~ Gabriel