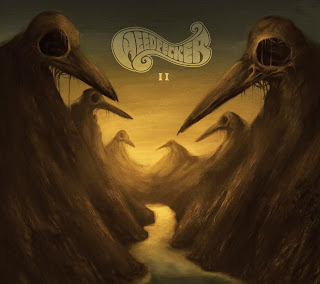 My expectations for the new Weedpecker album were pretty open before popping it on, not knowing how closely they'd be following the styles put down with their first album back in 2013, or how much they'd be charting a new course.  Happily, it's the best of both, with the heavy psychedelic blues of II pulling in old and new pieces and cooking them until everything going into the album has been thoroughly swirled together with heavenly flavors.  Heaviness, hard riffs, mellow cruising bridges, and pound after pound of leafy limberness with curling the songs around from one way into half a dozen others before it's out gives the new album a spine-jellying potency born of whatever's in Poland's water to make their heavy music groups so damn good.
From the friendliness of the chiller chord-stretching distortion to the fill-a-canyon expansiveness of their more rampage-inclined rides, Weedpecker have kept the quality high while playing with plenty of new ideas, honing away on what they like and opening more roads for future travels.  Currently only available on CD and download, but keep an eye out for further formats to get their day before too long.
~ Gabriel