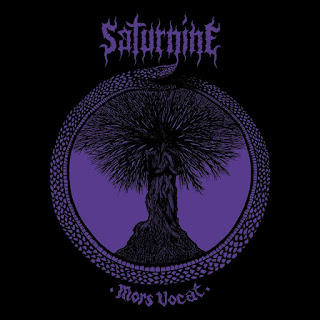 This first album from the Italian quintet of SaturninE drops in with seven heavy tracks; if you're asking 'why not nine?', the answer is that they're already at the limits of how much music an LP can hold, so just enjoy what's here, you number-obsessed person, you.  The album kicks off with the title track (the title, incidentally, taken from a line of poetry by the classical Roman poet Ovid, which is hissed in by voices during the intro, and which translates as 'The obscure death calls everything under its laws,' to give you an idea of the moods at play).  The slow but dramatic setting gives way to more animated doom with "Moloch", as the drums pick up, the guitar keens meaner, and a rasping growl comes in with feverish anger.  There's more than a little death metal influence on the music, but it's kept with its feet in the grave by the resolute commitment to a doomed attitude, bolstered by the strong bass riffs, the seething guitar, and the creative drumming.
Things slow down a bit towards the middle, but by and large, the album is a fine first full effort (you can check their demo from 2012 to see how they've grown), with plenty of sharpness to complement the grim morbidity.  The album is getting a release through Terror From Hell Records, on vinyl and CD (and BandCamp downloads), so give this emergent group a go if doom with a mean streak is something for which you've been looking.
~ Gabriel