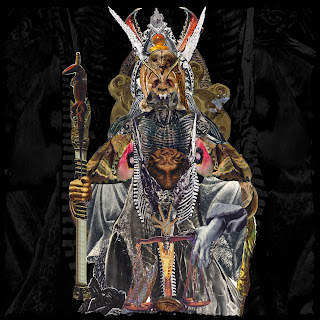 With five big tracks of staunch doom metal to its name, the debut album from California-based Battle Hag makes a strong beginning for the band, heavy and stylish.  First of the five is "Necronomichron", which, while not quite sanity-shattering, makes for a fine smoky entrance, and the main riff works well enough that the ~9 minutes flow by in fine form, liquidating your resistance.  "Never Turn Your Back on the Sea" picks up from there with a toothy buzz of distortion, and the singer takes a more prominent role in warning listeners of the watery dangers that lurk in wait as the mean main rolls on into darkness.
"The Book of Thoth" delves further into their monolithic style, letting the guitar get in some more lively licks as the bass hums along with titanic presence.  "Endless Fall" continues the form, with grim growls and a lush bridge from the guitar towards the mid-section providing extra momentum towards the close.  "Obsidian" steps up with that finish, opening up with a relatively restrained and disarmingly melodic piece from the guitar.  As the song continues, it gives way to deeper and more doom-drenched vibes, bleeding out with a low howl from the guitar and a death-rattle of cymbals.
The five tracks fit well together, staying faithful to the slow'n'heavy formula while tweking it here and there, and on the whole, the album makes a solid start for Battle Hag.  The band will be playing at the Press Club in Sacramento on July 21st, so if you're in that part of the world at the time and want to get your body worked over by some serious bassy riffs, get on over and catch the show; everyone else with a taste for that can get their fix through Battle Hag's BandCamp.
~ Gabriel