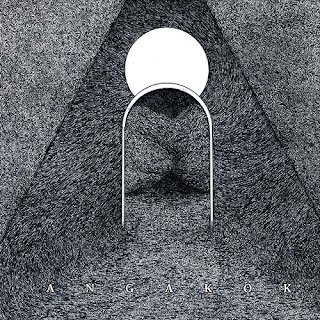 The ten songs packed by Angakok into their new album pop out swinging hard and aiming low, slapping sludgy anger into doomy riffs with a few samples thrown in for extra crunch.  Hitting both slow and fast movements of this mix, Angakok sizzle through the feedback, reverb, and clangor of their music with solid melodies grounding the madness.  While there's a couple of short tracks, that's balanced out by the ~12-minute "Samsara", which comes in around the mid-point to show the band's handiness with extensive destruction, and likewise, "Sivudlit Nertorpok" drops in at the end with a sharp-contrast meditative vibe to help your nerves feel less savaged.  Something worth checking in on for those who like their sludge to hold some dirty surprises.
~ Gabriel