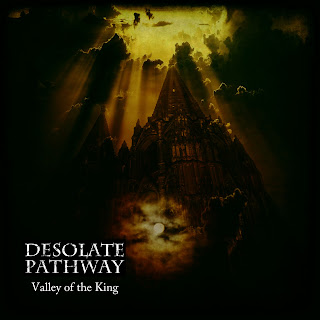 With the prelude of a medieval fantasy written on the back cover, Desolate Pathway's debut album (self-released last November) wraps itself up in sword & sorcery garb, brought to life in the music from the opening moments, with the rustle and clink of armor and weaponry underpinning the call to arms by the story's Prince Palidor.  Those of you who are already feeling your dragon metal senses tingle aren't too far off, though Desolate Pathway keep things grounded with a clear fondness for the somber but ambitious epic doom of the '80s rather than the flute and arpeggio-abusing sort of power metal that rolled in with the new millennium.  Accordingly, some of the riffs and lyrics can come off as a little too simplistic to modern audiences, but the moments of more fired-up excitement cut through the stoicism to deliver some sharp jolts of energy once your ears have let down their guard.
There's a pleasing sense of self-contained completion to the album, with (spoiler alert) the prince regaining his throne after the quest's tribulations, and the music giving a matching sort of ascension as the conclusion arrives in triumphant head-banging fashion.  Fans of traditional heavy metal with an epic aim and a story into which they can dive will find something tailor-made for them in the Valley of the King.
~ Gabriel

For Fans Of;    Evoken, Pilgrim, Below, Paul Chain, Saint Vitus