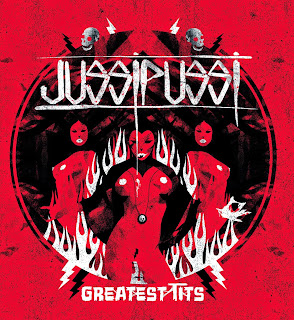 Taking a few pages from the book of stoner/desert rock fusion, the debut album from Jussipussi (allegedly named for a type of bread) finds the four-piece jamming craggy riffs and heavy break-downs together with generally high energy as they blast through their six offertory tracks.  The drummer's aggressive style works well with the blasts and chugs from bass and guitar, while the vocals hit that late-'90s desert rock attitude with a projective force, and the band's control of quick-change tempo and energy shifts calls some cool contrasts into play.  Hard edges go to work pretty regularly on Greatest Tits, but the guys are clearly having too much fun for any of the meanness to be taken too seriously, though the result is an effective head-rock inducer.  Best played at high volume where others can hear it, the album is an interesting addition to the generally heavier catalog of Taxi Driver Records.
~ Gabriel