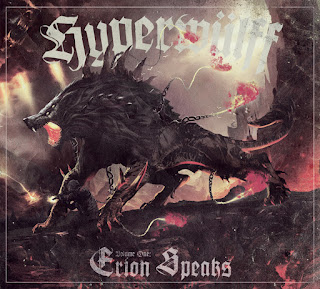 The guys in Hyperwülff have come back this year with a debut full length, and took it a step even further with that debut being a concept album. Oh, but any concept album would be far too simple, this one is about The Hyperwülff battling Robogoat, a destroyer of worlds, for a planet called Erion IX. If you like science fiction, this should already have your curiosity piqued. Coming out the gate with a concept album like this is a pretty ambitious step for a band, but the end result pays off. Even though the album is best taken in as a whole, from start to finish, I couldn't help but gravitate a bit more to the third track "Robogoat", it's a conglomeration of all kinds of different influences and sounds. Not exactly like anything I've heard before, but it was definitely interesting. Starting out with just a gritty guitar intro, it only takes a few seconds for the drums to fall in place, and the growled vocals to kick in. This hammers on for the next couple of minutes in true sludge metal form, growling and thrashing about like a caged animal. What happens next is at a bit before the two and half minute mark, things take a turn, with an overdrive guitar solo gradually churning into a face-melter that sounds could be straight from a Chuck Berry album. Things never fully recover from that blast of sound until the end, droning along and trying to gain some momentum for the reprise of that main, bludgeoning riff at the end. With the album being a bit over half an hour, it's not some overwhelming, grandiose art project that you'll get bored with ten minutes in. Chances are when you listen to it once, you're going to listen a few more times, at least. Give it a couple spins, and if you still feel the same way, go pick up the CD from Taxi Driver Records.
~Skip


For Fans Of; In the Company of Serpents, EyeHateGod, Electric Wizard