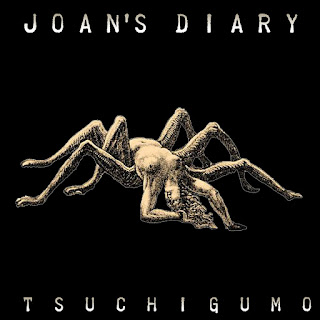 With 18 tracks making up the fourth album from Joan's Diary, the hits come quick, hard, and varied on Tsuchigumo, which takes its name from a mythical Japanese spider-monster (though they use Gustave Dore's woodcut of the Greek Arachne for the cover art, oddly enough).  With "La Morte" as an intro to the album, providing the first of several pieces under the 2-minute mark, what seems to be a sample from an Italian horror film is spiced up with synthetic effects, pushing the listener with a witch's laugh ringing in their ears into the rest of the songs.
The experimentation and alteration continues from there, with drums both manned and mechanical blurring together under distorted vocals, subtle but strong bass-lines, and surprises around every audio corner.  The industrial elements have much more of that original '70s 'let's trash these sounds' attitude to them than the deadened 'we've got a drum machine and three guitar chords' of '90s industrial rock, and the destructive energy they carry combines quite well with the sludgy metal base from which those synthetic edges are grown in JD's arrangements.  The band also handles slower (though not much calmer) material, letting the gloom overwhelm the anger with creeping sinister settings.  It's an impressively diverse and committed batch of noisy moods, asking more than the usual level of attention for all of its charms to be appreciated.  Copies are limited to 50 CDs, so give it a listen and a snag if it sounds to your liking.
~ Gabriel