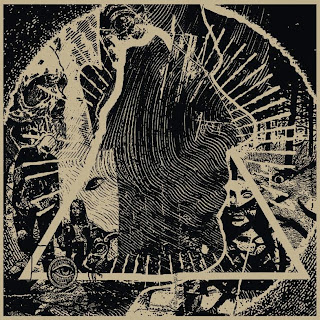 Both of the bands to be found on this split hail from Finland (actually from the same town, Oulu) and they've teamed up to self-release the split on a run of vinyl LPs.  You can start with either group's side, of course, but for the sake of simplicity I went alphabetically, letting Arson Under The Sea begin the assault on my senses with their harsh and doomy sludge.  Thick under-coatings of bass teamed up with grimy guitar and the howl/growl vocals to deliver a suitably filthy shot of misanthropic fury, with catchy (you know, by sludge standards) hooks and riffs to pull you along by the ears.  The drums bash and roll with a mean temper, and AUTS' four tracks give them plenty of room to experiment with expressing their anger.
Stolen Kidneys' side adopts a rawer tone for the guitar and vocals, with the singer sounding like his throat might get shredded beyond usability at any moment, and the buzz of the strings making for a chilled, almost blackened effect.  Slowed-down sections add to the skin-creeping feel, while other sections seem perfectly suited to be echoing up from the mouth of a cave with their colossal sound.  Between the two bands, it's a doozy of an LP, one likely to satisfy sludge fans who like it with the dirt coming right out of their speakers.  Vinyl and digital copies are available through the BandCamp page of either group, so check it out and turn it up.
~ Gabriel

Arson Under The Sea - Chains of Oblivion (320 kbps)