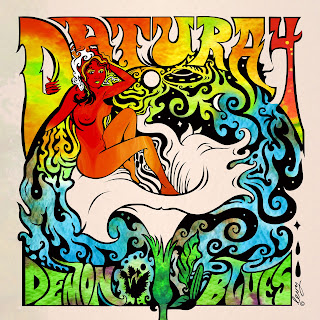 On their new album, DATURA4 deliver a blast of old-fashioned rock, fuzzed up with some desert rock elements for today's audiences and made easily digestible with clean-cut riffs.  Light touches of blues give it an earthy tone, though the band seems too easily drawn into poppy chant-along choruses (it's hard to say into which side the hand-claps fall), and as the album continues, that pop patina really stacks high, so if your tolerance for that sort of thing isn't too high, beware.  Less frequently used are the psychedelic cuts, of which "Journey Home" stands out as the best representative.  Here, the band shows that they can really deliver the heavy rock, and the vocalist steps back to let the sprawling guitar squiggling and thrumming bass take over to pleasing effect.  Meanwhile, tracks like "Hoonsville", with its race-track rattle and rich production adding to the setting, and "Pissin' Up The Wall" with its slow-stomp groove, gives the group more dirt in which to play, helping cover up the aftertaste of the more sickly-sweet stuff.  The clean and dirty come together in smooth synthesis for "Gravedigger Man", with its spidery guitar-work and clear chorus, before "Love to Burn" closes things out with its ~7 minutes of desert pop, showing DATURA4's ability to build extensively from a simple base.  While the album as a whole has some odd balancing going on, most of the songs lend themselves well to simple enjoyment, with a few offering a little something extra to fill your ears; not half bad.
~ Gabriel