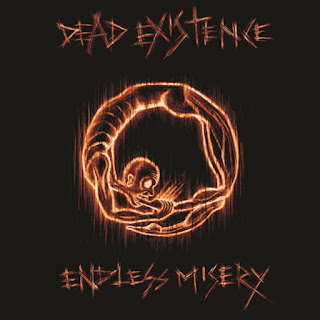 With striking cover art and some daunting track-times, the latest album from the UK's trio of Dead Existence cranks up the terror of their sludge-grounded slamming, with a death/thrash-like eagerness to beat the hell out of the drums, tear at the strings, and brutalize listeners with everything they've got.  Howls, groans, bellows, and death rattles materialize from the instruments and vocals, with the band bringing their chosen album title to life in all the right ways, and only rarely relenting in the inexorable crush.  Some blackened crispiness to the guitar at times helps push the dagger even deeper, and after the first few tracks, you've got little choice but to simply accept the beating the band is going to lay down.  As the beating moves into more existential and cosmic territory, the steam-rolling done by the earlier tracks destroys the resistance that might save you from their torturous knowledge.  The audible disintegration of "Delusion of Hope" sets things up for the monster closer "Regretamine" to finish the eradication, which it does with care to completion.
Coming to terms with Endless Misery is something that takes time, and plenty repetitions of the album in all its dreadful glory, so if you're looking for something to keep optimism at bay for a good long stretch, this is your ticket.
~ Gabriel