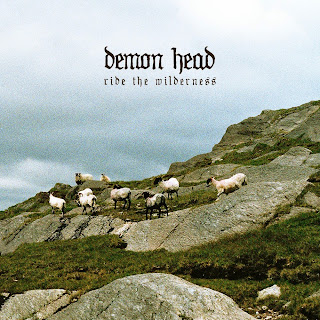 It's been an amazingly fast rise for Denmark's Demon Head, from the 2014 release of their demo through a 7" on Levitation Records right to here, their first full album.  If you missed out on either of those previous releases, don't despair too hard, as most of their material shows up in reworked, expanded, and updated forms here (most notably the band's "Demon Head" track, which has been revisited with each release).  The band's blend of heavy rock blurs the lines on traditional styles of metal (doom and heavy being the main operators), and while Demon Head's return comes in a more polished form than their previous releases, the essential grit comes through loud and clear.
Traces of Led Zeppelin and The Doors leak through in the vocalist's attitude and the saunter of the guitar's steps, while the bass riffs could be extracted from lost practice sessions of early Black Sabbath.  The warmth of the amping and the comfort shown by the musicians in working with each other brings a somewhat sunnier vibe to the music than might be suggested by the descriptions so far, but at its heart, the heaviness goes uncompromised throughout all of the approaches taken by the band.  In short, heavy rock fans need to get ahold of this one before it gets too scarce; you can do that with vinyl from This Charming Man Records, CD from Wolfbiker Records, cassette (Caligari Records in the US, Smokedd Production in the EU), or digitally from Demon Head's BandCamp, so pick your poison to Ride the Wilderness.
~ Gabriel