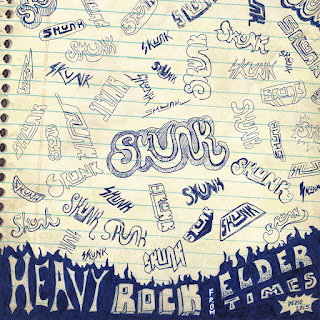 With a dedication to throwback metal so committed that the back of the CD case is done up like a sketch-covered high school notebook, and half the track titles dealing with one way or another of getting intoxicated, the new demo from SKUNK throws its cards onto the table with a grin and a bang of the head.  Classic-sounding riffs, bass and guitars that're chunky without getting too sloppy, and plenty of enthusiastic extra touches from the vocalist and drummer melt together for homage so earnest it feels like the disc-case should have smoke-stained wood paneling.
While old-schooled heavy metal is the main thing going on in this demo, the band also splashes in a fair amount of hard rock, and once in a while (as in the slow-grooving "Wizard Bong") some doom-like down-tuned devilishness rears its head as well.  The band plays well with all of its pieces, and they sound to be having good fun with each song, bouncing around when they can get away with it and buckling down when that works better.  It's also very nicely produced for something the band has branded as a demo, with enough grit left in to make the heavy rock feel even more genuine with its dirty attitude.  Fans of modern bands who draw almost all of their inspiration from the '70s (to the point where the main riff of closing track "Badwater" sounds like it was pulled right from Alice Bowie's "Earache My Eye") will want to check in on this one.
~ Gabriel

For Fans Of;    Orchid, Wo Fat, The Hunted Crows, Devil To Pay, Uncle Van & The Buzzards of Fuzz