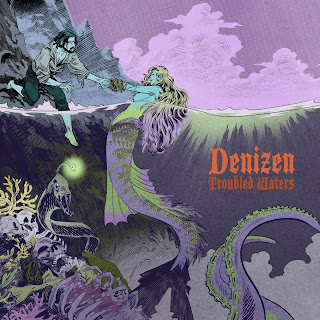 It's been four years since France's heavy stoner rock band Denizen released their first album, the heady Whispering Wild Stories, and fans of the band may have been wondering where they've been and what they've been doing.  The answer to those questions comes in the form of Troubled Waters, released by Denizen this April, which starts out sweet with the stoner crooner "Teddy Bear" before showing their darker colors with tracks such as "Whoresmoker", "Heavy Rider", and "Enter Truckman" thundering across the waves.
The group certainly brings the fire with their blasts of stoner rock essence, but they've got a lot of life in the melodic side of things as well, finding grooves that just flash-cook into your nerves to take control of your spine and get you rocking.  Each of the members plays their hearts out, throwing themselves into the riffs and rhythms without holding back in the slightest, and the result is one satisfying slab of heavy rock with the safety torn off and thrown into the sea.  Pick up a copy (CDs are out now from Argonauta Records, vinyl's coming soon through Stone Stallion Rex), get it playing, and bang your head 'til your neck gives out, then rest up and do it some more.
~ Gabriel