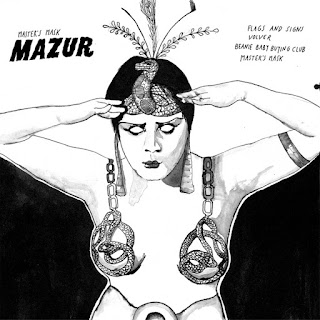 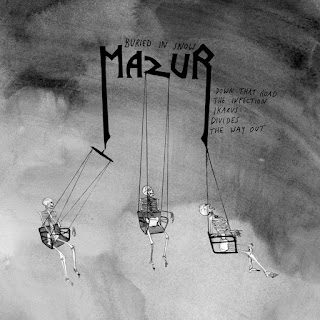 The new LP from Mazur combines two separate EPs from the German band; the first of these is Master's Mask, recorded back in 2004 and held back from release by the departure of the band's original vocalist, while Buried In Snow serves as the B-side, recorded in 2014 as an instrumental live session with vocals dubbed in afterwards.  The four tracks on the A-side come off with a generally more light-hearted vibe (it's hard to play tough when you've got a track called "Beanie Baby Buying Club"), and for those songs, the band ripples with a heady heavy rock approach, letting chunky bass riffs and a charmingly honest enthusiasm for the head-banging emphasized by the killer drum-work carry them far.  The music is sunny and cooked to the bone, pulling you closer by the ears even as they twitch themselves into clouds of swinging long hair and blistered fingers, and the closing title track rides that energy to a very satisfying crescendo.
With Buried In Snow's recording coming a decade later, it's neat being able to clearly trace how Mazur kept their earlier style, but grew it out heavier and meaner over the years.  The tasty riffs are still there, but with extra coats of fuzz and amplification enhancing their already solid impact, and more interest in letting the feedback swing harder and bleed a further edge when it hits.  As a counter-part to the friendlier early work, it fits in quite nicely, and the two halves show the band in a complimentary range of moods and accompanying techniques.  Solid all the way through, the two EPs will have you glad Mazur stuck it out, even if it's your first time hearing them.  300 copies of the compilation have been pressed on crisp clear vinyl, through Freezer Records, so give it a listen and a snag if it strikes your fancy.
~ Gabriel