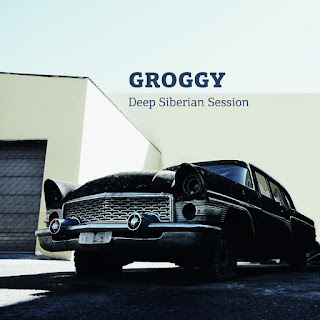 The Siberian duo of Groggy have been turning out top-quality stoner blues rock for a good few years now, and if you haven't already heard them (and that combo gets your ears at attention), their latest release is a prime option for digging into their catalog, though the blues get mostly drowned out by the other elements this time around.  Consisting of two tracks, with 45 minutes or so of jammy improv between them, Deep Siberian Session shows Groggy firing themselves up for a long-burning go of it, playing off of each other's creative heaviness with a sense of real pleasure to the live crafting as they let the low-end psychedelia toss them about.  Maxim Ryabikov handles guitar, Vitaly Dorofeichik is on drums, but they generate enough noise for a band with three times the personnel, and while the guitar dives down into territory usually staked out just for bass (doing some very cool double-up effects at times to provide extra hallucinatory kick), the drums are keeping right up with the experimentation, going hard-edged or chill as the mood moves them.
Separating the two tracks from each other can be more than a little difficult, given the jumbo assortment of changes and mutations each one packs into its time, but there's a little more grounding to the opening grooves of the second one, which provides a nice 'back to Earth' moment after the spacy explorations reached in the later part of the first round, and that style of reaching out to grab the listener and pull them along with clear riffs persists through the rest of it, instrumental freak-outs included.  As said before, it's a great introduction to the band for those who haven't heard them before, and a fine continuation of previous work for the fans.  Whichever camp you fall into, as long as you like heavy psychedelic music, this one's for you.
~ Gabriel