Flapping Up A Storm... 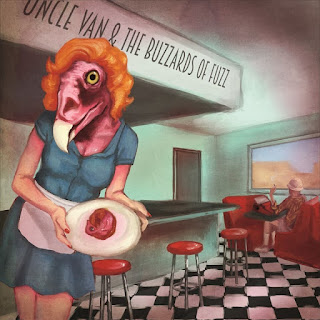 This debut EP from the American band of Uncle Van & The Buzzards Of Fuzz show-cases the band setting out with a blend of hard and stoner rock, gritty guitar riffs cushioned by the rich bass tones as the drummer pops out a solid set of punchy rhythm arrangements.  The four tracks map out a sand-blasted stretch of empty highways and craggy landmarks, and while the band gives a few hints of their power to blast right through the songs, they're usually happier to kick back and take a slow cruise with the motor at low rumble.
It's a nice start for UV & The Buzzards, enticing enough to draw in listeners looking for sun-baked tunes, deep enough with the song-writing to give them something to dig into with multiple plays of the EP, and fun enough to make its mark on the summer.  Tooth Monster Records are handling the release, so if you're on the prowl for some hard stoner rock (or stoner hard rock, whichever), load up this Buzzard Custard and chow down.
~ Gabriel