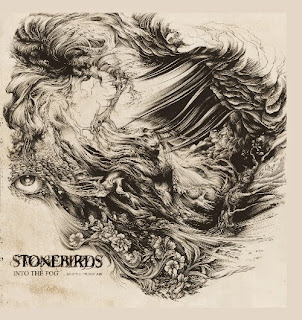 Stonebirds have been warming up since 2011, with a demo, a split, and a live EP released since their start.  Come July, they'll be putting forth this first full album, with its five big tracks of psychedelically-influenced doom and heavy rock.  First of the five is "After the Sin", which sets the standards for what follows with its deep-layered riffs, twisting build-outs, and bleeding trail of harmonics.  From that mixture, the band proceeds to explore further depths of the combination, letting the undertow catch hold and pull them beneath the waves of bass and guitar as the drums give a furious fight against the drowning tides.  By the time "Burned Flesh" rolls in, the waves have mostly won that fight, and "Perpetual Wasteland" ends the album with an aggressive victory lap, going harder and deeper than any of the others.
It makes for an impressive first album, and with the limited vinyl release through Pink Tank Records scheduled for July 14th (500 copies total, in four different color variations), it's a sure bet that this will be a highly-coveted album in the months to come.  Keep an eye out for this one to show up on plenty of year-end top album lists, and get your ears in gear to hear this one before the release date leaves you in the dust.
~ Gabriel