Drawn From Past Crimes... 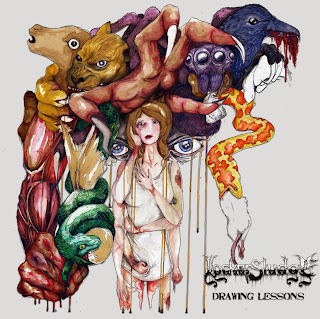 For their latest EP, the UK three-piece of Lockersludge (which has been going for the past 15 years, though this is the band's first release since the recruitment of their bassist, Brew) have opted to start hard and stay that way.  The first of the tracks, "Burden of Pain", leaps into the fray with sludgy tones and timbre, complemented by the harsh punk approach of the vocals, and the slow flow from there through the rest comes naturally.  Anger and a sense of oppression rule the lyrics, as you might expect, while the music lets out that rage with slow-burning defiance, pounding away with insistence.  The five songs go by fairly quickly, as despite the sludge elements, the band spends little time on feedback adulation or trenchant grooves; instead, their punk side animates things to move right along, even when singing about witches going to have sex with the devil.  The band has held on to the sludge experimentalism from their early days, so check it out if you want it with a few curve-balls thrown your way.
~ Gabriel

For Fans Of;    Boar, Sick Of It All, Motherslug, Return To Zero, early Slayer