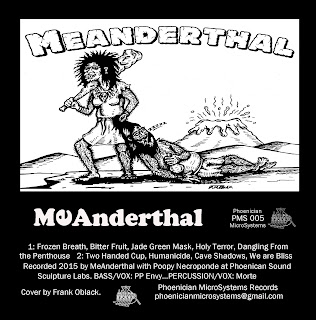 Intentionally limiting themselves to just bass and drums, the two-man band of MeAnderthal (as a side note, both members also play in Kill The Hippies) crafts a raw, barbarian-inspired form of stripped-down metal that's a little shaky in parts, but generally stands firm with its stompy riffs, charmingly rough attitude, and the band's eagerness to push their instruments to unusual places.  Though it's not a constant, the band really captures the 'dangerous desert' feeling of the Conan-type sword & sorcery movies when they reach for it, partly through keeping the mood heavy and angry, and partly through the sense of loneliness they can bring out with their particular set-up.  The songs move quicker than you'll expect from your first encounter with the album, and the end comes without much warning, but as MeAnderthal moves through their mean beats and far-roaming search for satisfaction, there's plenty of hooks and surprises to catch ears and interest.  One to check out for anybody out there with a taste for open-minded heavy rock and early metal, MeAnderthal is out now on tape and BandCamp for immediate enjoyment.
~ Gabriel