At the Cult of Sludge 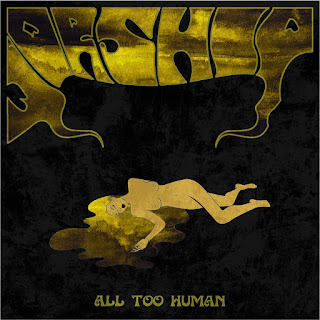 California seems to always bring the experimental out of different things, Worship's doomy brand of hectic sludge metal is no exception. Instead of the slower or mid tempo sort of songs you expect from most doom and sludge metal, Worship offers up a barrage of sound at every turn on "All Too Human". Clocking in at seven tracks and around twenty-five minutes long, there isn't a lot of time for pleasantries or long drawn out interludes, not among the sheer volume of the band hammering out their tunes fast and loud. As you get closer to the last few tracks, things slow up some and start to take on more of a doom metal edge to their sound. The last song was my pick of the batch, an outstanding closing track "Misanthropy and Love" starts off with some breakneck drumming and slamming guitar riffs, accompanied by the usual screaming vocal performance. Just after the one minute mark, things slow down in a long, droning guitar piece that carries along for a couple of minutes before the dark shadow of doom overtakes the entire performance. It carries on this way, slowly becoming more twisted and distorted as the album comes to a close. Even though this hulk of a recording was released back in January, it's making a vinyl debut with the first copies being mailed out around today according to their bandcamp, which is where you can go and pick up one of the three different colors they have.
~Skip
For Fans Of; Black Tusk, Hail!Hornet, In the Company of Serpents