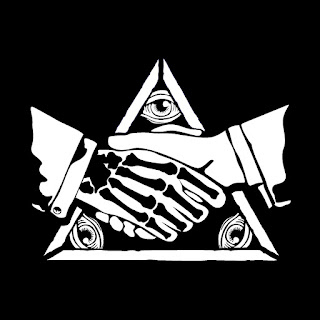 All City League are a new stoner/alternative rock group from Canada, making their debut with this four-track EP, putting straight-forward groove together with some dirtier fuzz for something in the same postal code as desert rock, but with a different take on how to get there.  Nursery rhyme references are sprinkled through a few of the songs, given a twist by the rough bellowing delivery, while the drums, bass, and guitars crank out riffs both sweet and nasty.
On the down-side, the last track ends without much of a finish, and there's some painfully over-used lines showing up in the lyrics, for instance, "I was lost / But now I'm found!"... then again, that one shows up in a song called "Troll Bridge", so take it with some salt.  Overall, it's a decent enough EP, though you'll need a disposition already leaning towards simple but loud riffs and less attention to what's being yelled for it to really snag you, and you can pick up one of the band's 100-copy run of CDs over on their BandCamp page.
~ Gabriel